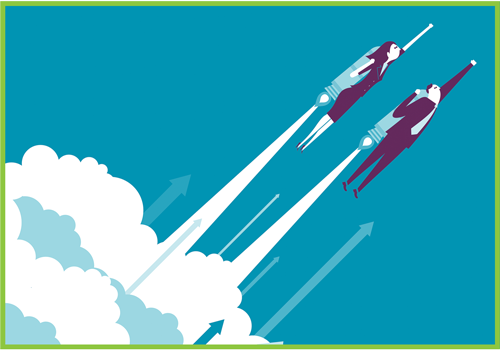 So far we have explored three of the four primary benefits of OKR – Focus, Alignment, and Engagement.  The last and fourth primary benefit of OKR, but certainly not the least, is Stretch Goals. Let’s examine why stretch goals are so important to an organization’s ability to achieve its Big Vision.

When I was young, my father taught me and my brothers how to water ski. For the most part, Dad was a patient teacher, but he would occasionally get frustrated if we weren’t falling.  To which me and my brothers would ask, “Why do you want us to fall so much?”  His reply was simple, and it has become a guiding principle throughout both my personal and professional life: “Son, if you aren’t falling it’s because you aren’t trying anything new. If you aren’t trying anything new then you are not learning and growing, and if you aren’t learning and growing, then what’s the point?”

I learned that lesson so well I dislocated my 3rd vertebrate in a water-skiing tumble when I was attempting to beat the lake record for longest barefoot ski run. You definitely don’t want to do that!

But Dad’s point was spot on.  If you are going to really push the limits of your abilities, it’s likely that you will take a tumble or two.  But if you don’t fall occasionally, it’s a given that you aren’t stretching yourself either. And if you aren’t stretching yourself, complacency and mediocracy begin to creep in… Is that what you want for yourself and your organization?

I think more than anything, risk aversion is why individuals and teams fail to set ambitious goals for themselves and to really stretch the limits of their abilities. What if they fail? What if they fall? How will that be perceived and what will be the consequences (real and imagined)? This is why there exists a tendency in organizational life to shoot for the roof with our goals rather than shoot for the stars.  Hitting the roof is fairly simple, but the stars? That’s just too risky.

Let’s face it, complacency and mediocrity are an easier path for everybody. Greatness, well that just involves too much risk and potential consequence.

OKR to the Rescue

This is why OKRs are so crucial to an organization’s overarching strategy. Ambition is hard-wired into the OKR ethos, it’s about setting stretch goals for you and your team that really force you to push the limits, take risks, and achieve amazing things. As I talk to clients about setting stretch OKR, I remind them of the old NASA quote, “Gentlemen, assuming it’s impossible to put a man on the moon, how are we going to do it?”  A well-worded Objective should make you slightly nervous as you ask, ‘Can we really achieve that?’ They are aspirational, inspirational, and ambitious! This is how you really push the organization toward its Big Vision and link your strategy to both intention and purposeful action. A successful OKR Implementation gives you the framework to achieve your Big Vision.

Houston, we have Competition!

Now, it must be said that not all your OKR need to be hair-on-fire-save-the-world dream shots, but some of them must be. This is crucial for two reasons:

1) You absolutely will not achieve your Big Vision without some risk, period. You are going to have to take some measured risks and push the limits to what you think you can accomplish in order to beat the competition in this world. A NASA scientist once told me that if you can conceive of a thing, it’s almost statistically certain that somebody else in this world it trying to invent it already. You must take risks to thrive in this global marketplace to stay ahead of the crowd.

2) The absence of risk, or ‘risk aversion,’ creates a self-perpetuating culture of mediocrity in an organization.  In other words, it’s contagious.  Conversely, a culture that allows risk, and fosters a risk-taking ethos (and that embraces failure as a fundamental aspect of learning and growing) is also contagious.  Which organization do you want to have? Where would you rather work?

Remember, OKR is the action element of strategy. If you are shooting for the stars with your OKR and you only hit the moon, well, you’re still doing pretty well.  And I hear the view is great!

Kevin Baum is a Global OKR Coach with OKRsTraining.com, and the author of Lessons from the Line, Why Every Leader Should be a Firefighter for a Day.